The construction of slip ring induction motor is quite different compared to slip ring induction motor. Slip rings I.M provides some advantages like provides high starting torque, low starting current and it improves the power factor. We can add external variable resistance to the rotor of this type of motor. So, we can able to control the speed of this type of motor easily.

>> A slip ring is also used in applications where the load require good speed control. By the uses of slip ring in an induction motor, we can easily control the speed of induction motor by adding an external resistance to the rotor. Slip rings I.M provides some advantages like provides high starting torque, low starting current and it improves the power factor.

>> A slip ring I.M motor can be used in several forms of adjustable speed drives. Some speed drives require to change its speed with several intervals of time so this type of motor can be helpful for that application. But Today speed control by use of slip ring motor is mostly superseded by induction motors with variable-frequency drives.

>> These motors are suitable for loads requiring high starting torque and where a lower starting current is required.

>> These Motors are Used for the loads which require a gradual buildup of torque.

>> The Slip ring induction motors are used for loads which having high inertia, which results in higher energy losses.

>> This motor is Used for the loads which require good speed control.

>> These motors are used in conveyors, cranes, pumps, elevators, and compressors which requires high starting torque.

You can check this – Single phase induction motor applications.

Every motor has main two parts: Stator and rotor

As it names Wound rotor, the rotor is wound with a 3 phase windings. Bar, straps or wires are used for winding. A large number of rotor turns will increase the secondary voltages and reduce the current that flows through slip rings. Each phase of winding is connected with the slip ring. These Slip rings are insulated from the rotor shaft.

Slip rings are not used for transferring power but used for adding external resistance into rotor winding. Each motor has three slip rings which are mounted on the shaft but insulated from a shaft.

The working principle of Slip ring I.M is same as the other induction motors. The poles of the stator are arranged in a manner that they create a rotating electromagnetic field when w gives A.C supply to the motor. The interplay of magnetic fields then forces the rotor to follow the moving field(s) of the stator. The stator of slip ring induction motor is same as the other induction motor. The rotor of the I.M is totally different from the squirrel cage rotor. In this type, the rotor has 3 phase star winding. Each phase winding is connected to the slip ring. 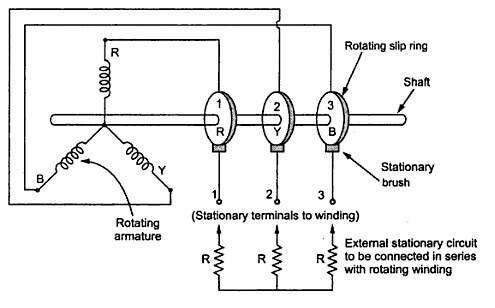 >> Slip ring motors have high overloading capacity and smooth acceleration during heavy loads and no abnormal heating during starting.

>> This motor attains High Starting torque with a low starting current. Maximum starting can be attained in the slip ring motor compared to squirrel cage motor by inserting an external resistance in each phase of the rotor circuit and cutting the resistance during starting

>> Speeds can be adjusted in the case of slip ring (wound rotor) induction motor So that they are considered as “variable speed motors” also.

>> Initial and maintenance cost of these motor is high as compared to squirrel cage motor Because here in slip ring I.M, there is a three-phase winding on the rotor and in other hand squirrel cage has no winding on its rotor.

>> It has a lower power factor at light load.

>> Sensitivity to fluctuations in supply voltage.

Difference between the slip ring and squirrel cage induction motor

Here we know the difference between the Squirrel cage I.M and slip ring I.M

Here we will derive the equation for required external resistance for slip reing induction motor. Consider,

R is the Resistance of the rotor winding

X is the Inductance of the rotor

Smax is the Slip at pull out Torque

R is the External Resistance added to the rotor

Ns is the Synchronous speed

Nmax is the speed at which pull out Torque occurs

if we add external resistance R then,

From the equation (i) and (ii)

here r can be measured by a multimeter. So basically through this example, we can say that resistance of value 9 times that of slip ring (wound) rotor resistance needs to be externally connected here to bring the benefit of maximum torque at starting.