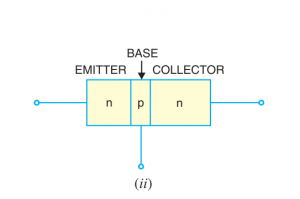 This transistor has mainly three regions .1) emitter, 2) base, 3) collector. Here you can see every region have the different width. middle region base has a narrow layer or smallest width. This base region is heavily doped. Here emitter and collector is p-type semiconductor so they contain majority charge carrier as holes. The base region is an n-type semiconductor in which majority charge carrier is electrons. 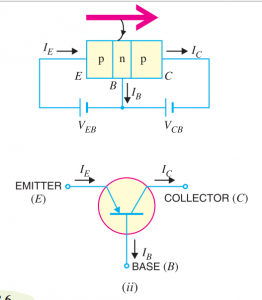 Why is the current direction in pnp transitor from an emitter to base?

All these regions have different width in pnp transistor. Check out detailed about transistor regions. The base is a thin layer and middle region. Here emitter-base junction is in forward bias and Base- collector is in reverse bias.

In the above figure shows the basic connection of pnp transistor. The forward bias between emitter and base cause current to flow from p type emitter to n type base. This constitutes current ( Ie). P type semiconductor contains holes and This holes going to transfer to the base. The base is n-type so this holes combine with electrons and constitute current ( Ib). This base is very thin and lightly doped region so, very few electrons combine with holes. Only 5% of holes combine with electrons. Other electrons move from base to collector. This constitutes current ( Ic). This current (Ic ) is 95% of emitter current. We can tell emitter is almost equal to collector current. You have to note current conduction in pnp transistor is by holes.

Pnp transistor has same useful as npn transistor. Check out the npn transistor uses. These transistors are mainly used in an amplifier circuit to amplifies signal. This types of the transistor also use a switching in may electronics circuits.

bc 557 is another type of pnp transistor, the main specifications of this type of transistor are shown below.

Where does it use?