What is electric drive?

Motor is required in large numbers of applications in industry. Systems employed for motion control are called as drives and may employ any of the prime movers. Drives which employes electric motors are called electric drives.

Nowadays, Electrical energy is generated in the large amount for uses in industries, agriculture, domestic needs and also for electric traction. In all these electrical applications, electric motor is essential. This motors in the application are also terms as electrical drives.

In electrical drives choice, AC drive is preferred because of the following points,

The electric drive system can be easily explained with the block diagram of that system.

Electrical drive system block diagram is shown in the figure. Working and the importance of each block in the system is given below. 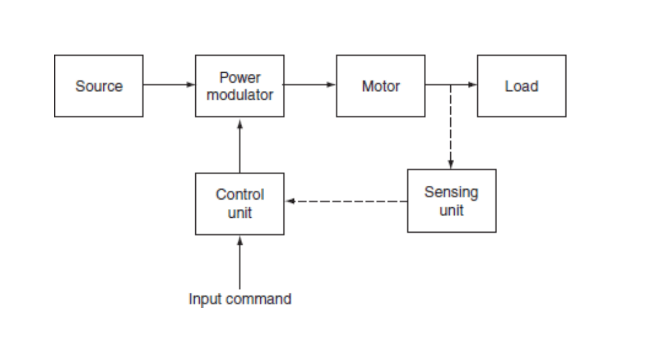 Power modulator has numerous function in the system.

⇒ The main function of power modulator is to modulate the flow of power from a source to the motor. It modulates the power as per torque-speed characteristics required by the load.

⇒ It is used for selection of mode operation of the motor.

⇒ It converts the energy in a suitable form which required by the motor.

⇒ It regulates source and motor currents within some required value. It regulates the current in starting, braking and some speed reversal conditions.

Motor is generally used in the system to convert electrical of energy into electrical energy. Motors used in electric drives are induction motors. synchronous motors, Dc motors, stepper motors and also reluctance motors. In past, induction motors and synchronous motors are only used for constant speed applications. But nowadays, AC motors are used in variable speed drives due to some development in some modern electronic devices. Dc motors are used in battery drives.

Load can be anything which consumes power. It is machinery, such as fans, blowers, pumps, robots and machines which performs a given task. According to Load requirement, motors and source can be chosen. Load are broadly classified as industrial load, domestic load, agriculture load etc.

This unit is consists of current sensor or speed sensor. It senses the output speed or required quantity. Speed is sensed in the system by tachometer which is coupled with the motor. Current sensing is required in the system for current limit control. Sensing unit is directly attached to the controlling unit.

The nature of the controller is used according to power modulator used. When semiconductor converters are used, the control unit consists of some firing circuits in it. Other types of the controller are also used in electrical drive system.

Electrical Drives have numerous advantages over other drives. Advantages of electrical drives are as below:

⇒ It can not be installed where electricity is not available. For installation of electric motor electrical energy is necessary.

⇒ On the failure of electrical supply, the electrical drive system cannot work.

⇒ It can cause noise pollution.

⇒ The initial cost of the system is high.

⇒ It has a poor dynamic response.

Here we saw a detailed article related to electric drives. As we saw any system employs for motion control is called as drives. Here motors are also sometimes termed as drives. AC and DC both types of drives are used in industry as per application.

Electrical drives have numerous application like pollution free, longer life, economical and easy transportation. Some disadvantages of electric drives are that in the failure of electricity, electrical drives cannot work and initial cost is high.

Hope you know all these related to our topic. Still, if you have any doubt regarding this topic feel free to ask in the comment section.