In previous we see the different connection of the transistor. The transistor can be connected in a circuit with three basic connection.

In this circuit connection, the input voltage is applied between the emitter and base terminal. An output is taken between base and collector. Here base is common in both input and output circuit of the transistor. Hence it names common base configuration. Fig 1 shows npn transistor whereas Fig 2 shows pnp transistor. 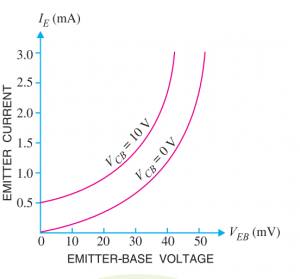 By figure you can note this following points: 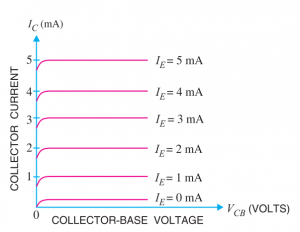 By the output characteristics we can note down the following points:

Output resistance is very high in terms of Megaohms. This is because of collector current not change with the collector-base voltage.

Here we see equations for current amplification factor and expression for emitter current.

The current amplification factor is the ratio of change in output current to change in input current.

So that, For common base transistor current amplification factor is the ratio of change in collector current (Ic ) to emitter current ( Ie ).

The expression for emitter current

As we know the whole emitter current does not reach to the collector side. There is a small combination of holes to the electrons which constitute base current ( Ib ). Moreover, base-collector junction is in reverse bias so that some leakage current flows because of minority charge. So that total collector current is :

The part of emitter current which reaches to the collector terminal i.e  α Ie

The leakage current which is due to movement of minority charge across base-collector junction because it is in reverse bias. This current is generally much smaller than α Ie

Question for you to solve: