MOSFET is a voltage controlled device and has some decent applications. There are some advantages of using MOSFET in electronics circuits. Some important applications of MOSFET are given below :

1. Mosfet is used for some switching applications an in electronics device.

2. It is used in some amplifying circuits.

3. It is used in chopper circuits

4. MOSFET can be used as a high-frequency amplifier.

5. It can be used in voltage regulator circuits.

6. It is used as an inverter in some of the electronics circuits.

7. It can be used as a passive element e.g. resistor, inductor used in a circuit.

9. It is used in some DC brushless motor drives.

10. It is used in DC relay in electronics.

11. It can be used in digital circuits

Why do we use MOSFET?

Mosfet is a metal oxide semiconductor device. It has mainly three terminal – Gate ( G), Drain ( D) and source ( S ). Here gate is isolated from the channel by metal oxide thin layer. A power MOSFET is a voltage controlled device. This MOSFET is used for high-speed switching operations. The switching speed of MOSFET is very high and it has switching time in order of nanoseconds. It also has applications in low power high-frequency converters.

Advantages of using MOSFET instead of BJT is it does not have the problem of second breakdown phenomena as in BJT. MOSFET generates very less heat loss compared to BJT at high currents. So it has high efficiency than other devices. So it is used extensively in power electronics.

However, MOSFET require special care in handling and has a problem of electrostatic discharge. MOSFET are available in generally two types :

Channel is made during the operation of MOSFET device.

MOSFET application as a Switch

As above we saw there are two types of MOSFET. Here we know the application of MOSFET using Enhancement type MOSFET. In this circuit, we are using enhancement mode, an N-channel MOSFET is being used to switch the LED or LAMP for ON and OFF. The voltage is applied at the gate of the MOSFET at that condition the lamp is ON. When the zero voltage level is applied at the gate then the device and lamp is turned off (VGS=0. So by this way, we can use MOSFET for switching operation. And MOSFET has a very high switching device. MOSFET as an amplifier 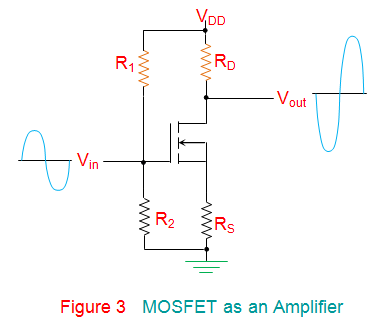 Here we take basic enhancement type MOSFET for operation. The simple amplifying circuit using MOSFET is shown in the figure. For a good amplifying signal we must require to get an operating point for that circuit. Here input signal is applied between gate ( G) and source ( S ) to generate require gate signal for getting an operating point.An outputt is taken between the drain ( D) and source ( S). Simple MOSFET amplifier is shown in the figure.

MOSFET use as the chopper

MOSFET is a voltage controlled solid state device. It has a very high switching frequency so that it is used in high-speed switching operation. MOSFET also used as amplifier, copper and as a regulator.

Hope now you understand the application of MOSFET. If you have any query related to MOSFET applications in electronics and everyday uses of MOSFET than comment below. We try to solve your problem as soon as possible. Thanks for your interest and keep learning.

mosfet as a switch – www.edgefxkits.com

Applications of Transformer In Daily Life and Industry